When I first met Joel Comm, I thought he was a “lowercase d.” It was a bunch of years ago and I was at a Tony Robbins conference and he was one of the speakers. After his talk there were a few people in line to talk to him and after each one, he took their picture with his phone and then entered in their contact info.

When I got done talking to him, he politely said that it was nice to meet me and as I waited for my picture and got my contact info ready, he moved onto the next person.

From that day forward, anytime I read anything he wrote, I gave him this really whiney annoying voice.

It wasn’t until years later that he and I were speaking at Inbound in Boston and met up again at the speakers party. We talked for about 20 minutes or so and before I left, he took my picture and added my contact info into his phone.

Actually, Joel has always been cool. Me? Not so much. I mean, now I am. But back then I still had a few things to work on. Probably why I was at a Tony Robbins event.

Anyway, this was a really fun interview. We actually did it twice because I deleted the first one by accident.

We talk about some cool stuff like his TedX talk, being authentic, giving advice and of course his whole Do Good Stuff thing and how a portion is being donated to Water is Life.

It’s worth the listen. I think so anyway. 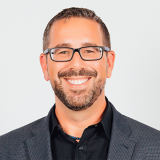 Marc Ensign is a speaker, author, marketer and all around do-gooder. He is the "Big Cheese" at LoudMouse, an authority marketing company that specializes in transforming people with a message into influencers who change the world. As a speaker, Marc has shared the stage with Gary Vaynerchuk, Chris Brogan, Brene Brown. Simon Sinek, Chelsea Clinton and many of the brightest minds of our time. And his writing has been featured on CNN, ABC, MSN, The New York Post, Forbes, The Huffington Post and others. He's even performed on Broadway in the show Rent...but that's a different story.

How You Can Listen

Stay Up to Date